Succession Planning is one of the biggest challenges facing Family Business worldwide today.

Over the past 40 years or so there have been some significant advances in how advice is given to families in business, and yet we still see statistics and studies that show that, in general, succession planning or business continuity planning is still an area that family firms struggle with.

You may wonder why this is the case.

Firstly, why only the past 40 years? Family businesses have been around for centuries and yet we are only just starting to understand and study the complex dynamics that exist within family firms.

And secondly, why, given all the academic research that has been conducted over this time, are these statistics not improving?

Hopefully we will see these statistics get better in the future, through a combination of academic research and by highlighting to family firms and their advisers some of the emotional aspects that are often neglected when advice is given.

The purpose of this article is to acknowledge and highlight the fact that whilst much of the advice given to you is logical and from a ‘text book’ perspective valid, there are often underlying emotional concerns that will impact your ability to make decisions aligned to that logic.

To help highlight this I have developed a three-circle model to help you to consider any advice or decisions you need to make, away from the ‘logic’ of that advice.

More on this later, but before that let’s look at some of the academic stuff that I think is useful.

There is an established and very well respected Three-Circle Model already within the world of family business and indeed I think a good understanding of this is an extremely valuable first step in considering your succession planning.

The original and best Three Circle Model was part of a great article entitled ‘The bivalent attributes of the family firm’ and was written by Renato Taguiri and John Davis.

You can listen to my interview with Prof. John Davis here. We discuss the model, its uses and how you can apply it to your own firm.

Originally developed during their time at Harvard University in the late 1970s, it considers all those who may influence the family business while not necessarily owning or working within it.

It is best represented in the following diagram. 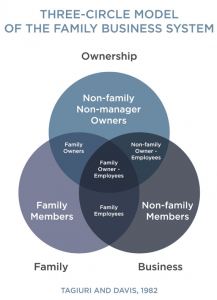 The diagram shows that within a family business there may be a number of influencing individuals that may or may not actually be working within the business.

As an example, a brother and sister may be in business together with their parents, if either of them have spouses that don’t work within the business there is little doubt that those spouses will be influencing the brother and sister in their everyday lives. The three-circle model helps you to identify this.

I have recorded a video here that explains the complexities that come from being a family in business together.

A further observation within the original article, that is often overlooked is;

‘Given the potential for greater love and greater hate among family members, it is not surprising that emotions between relatives often surface more easily than between non-related individuals.

Because of the emotional content of their bond, relatives working together may find it difficult to interpret one another’s actions and words objectively.

Instead, communications often are interpreted in terms of their meaning in a family context and they can elicit the same responses they did at an earlier time in life.’

What this suggests is that many decisions made within the business are done so for the benefit of the family rather than the business.

It also highlights that the success of a family firm lies in how well these bivalent attributes are managed.

Now, while I have said that this is not an academic article, there are certain academic theories or models that are extremely useful when discussing succession planning, and this is one of them.

Using this model to list everybody involved in the family business can help you understand which roles you see individuals fulfilling in the future, and who will potentially influence them.

This may help you decide whether you want ownership succession, where you simply pass the physical entity of the business to your children without them having any active role in it; or management succession, in which they are also involved in the day-to-day running of the business.

If the former, you will need to consider which current members of staff would be best-placed to take over the management of your business. If there is no one suitable, you will need to draw up a list of skills, attributes and requirements for the desired person and look to recruit externally.

This decision may lead to difficult discussions with your children, and this is where the family dynamic comes into play.

If it were a non-family business and you were thinking about your retirement, you could simply say that you needed to recruit, either internally or externally to replace you. Throw a family member into the mix and things become more complicated.

If you were a non-family business, the decision around your succession would mean only that there is a new vacancy, and the best person for the job would be sought. The decision for a family business is typically clouded by a perceived requirement to include family members ‘because we want to make sure they’ve got a job’.

One way to reshape the discussions around succession planning is to stop calling it succession planning! The phrase ‘Succession Planning’ paints a picture in people’s minds of a beginning and an end. For everyone involved it seems a seismic change and something that happens overnight.

We can then start to look at the challenges that the business, family and individuals will face during the transition and start to tackle those. This is simple to say but not necessarily easy to do. But, it is essential that the emotional element of the transition is understood.

I explain why in this video.

I would like to introduce a new three circle model, it will act as a tool to assist you with your business continuity discussions, in particular when used in conjunction with the original three-circle model.

The new model looks at the three essential elements to a successful Business Continuity Plan.

The success of a business’s continuity or succession planning lies in the management of these elements, and is expanded to incorporate not just the financial and technical aspects of a succession plan but also the many, often conflicting, emotional aspects. 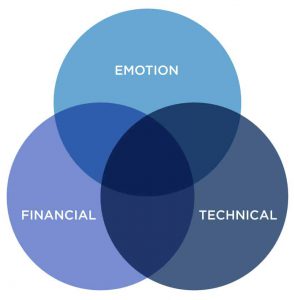 All too often we see examples of advice and decisions being made that only pay attention to two of the circles.

Typically, this will be the circles linked to the financial and technical aspects of succession planning.

It is easy to understand why this might be the case, an accountant may be able to present a technical solution to an issue that she is presented with, however she may not be able or willing to dig deeper into the emotional aspects of that solution.

Some may feel it isn’t their role, as such they don’t ask the right questions, they present the logical choice to you.

Even those that may not get a response, you’ve gone to see your accountant to ask their advice on a business structure, not to discuss your relationships with your nearest and dearest.

But, I believe that the success of a succession plan comes down to the successful management of all three of these circles.

Ignoring any one of them is opening the door to potential future issues.

Now I am not suggesting that you should now consider your accountant, solicitor, financial planner or non-exec director as a counsellor or psychologist, but paying regard to the fact that as a human you are an emotional creature and recognising that everyone you deal with is also an emotional creature may help to explain why irrational decisions are made.

Appreciating that we, as humans, make emotional decisions that often defy logic and baffle those around us will help us to consider the decisions we make in a different light.

In his book ‘Profit First’ Mike Michalowicz uses a brilliant paragraph to explain this so I am just going to copy it!

‘How many times did Spock stare into Captain Kirk’s eyes and say “That is highly illogical”? Well, just like you Captain Kirk was a human, and humans are not logical.

We are emotional beasts with monkey brains. We like shiny objects; we stuff ourselves when there is free pizza; we buy twelve pounds of cat food just because it is on sale, even though we don’t have a cat. But we also know to trust our gut, go with our instincts, take shortcuts, and be inventive on the fly so we can move on and get more things done.’

If you would like some help with your own Business Continuity Planning, get in touch with Russ.