Russ short-listed for Podcast of the Year!

Russ has been hosting the Family Business Podcast* since he set it up in July 2017. He has been interviewing family businesses and their advisers, finding out about the challenges they’ve faced and what they’ve learned along the way. With more than 60 episodes the podcast has been downloaded over 38,000 times (as at June 2019). It helps family businesses to address some of the difficult issues that are often skirted around or ignored. Listeners gain insight and solutions to some of the challenges that come from being in business with your family. 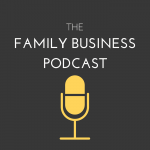 He has had the privilege of interviewing some of the world’s leading experts in the field of family business  and prominent family business owners. Episode 48 was an interview with Sir John Timpson, chairman of Timpson (the High Street cobblers). Episode 21 featured Mitzi Purdue who married into the Purdue Chicken empire in America (think Bernard Matthews’ but for chicken) and is the daughter of the founder of the Sheraton Hotels chain.

The podcast has been  a huge hit with its audience and has led to a number of speaking engagements for Russ. His first was at the Family Firms Institute conference in London last year. This has led to Russ’ first international speaking gig! Russ will be presenting at The Purposeful Planning Institute Annual Conference in Denver in July, with potential speaking opportunities following in Miami, New York and Australia.

The podcast continues to be recognised by professionals and family businesses alike as an extremely useful and entertaining resource, and is helping family owned businesses to thrive.

He was naturally delighted to hear that the show had recently nominated for Podcast of the Year in the inaugural Content Marketing Academy Awards.  The excitement levels increased a few notches when he found out he had been shortlisted into the final four. In the end the competition proved too strong. Despite not winning the overall prize, the nomination and shortlisting is recognition of all the hard work that Russ devotes to producing consistent, useful content for the world of family business.

Russ is determined to continue to build on this success and provide useful and insightful content for this essential sector of the UK economy. Hopefully he will go one step further next year when he hopes to add “award winning podcast host” to “international speaker” on his CV.

You can see all Russ’ Family Business Podcast episodes HERE.

*A podcast is similar to a radio show but it can be downloaded onto your smartphone. You can then choose when you listen to each episode.